New CD Released: “Music of Tribute: Schnittke and His Ghosts” 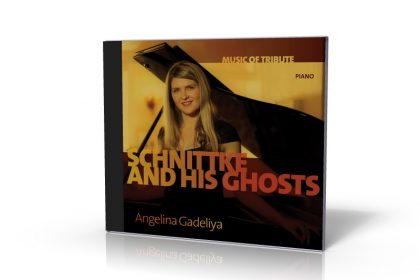 Alfred Schnittke, the outstanding maverick of Soviet music in the late 20th century, wasa man haunted by the ghosts of his predecessors – classical, twelve-tone, Russian mystical and otherwise. Trapped in an oppressive Soviet Union (his passport was taken away and he was not allowed to travel abroad), he made his living writing film music and developing a unique
‘polystylistic’ technique which blended classicism, modernism, Russian tradition and his own personal mysticism. When he was finally able to return to Vienna, the site of his first musical studies, he described the experience as multi-dimensional. “The past,” he said, represented
a world of ever-present ghosts.” Hence the inspiration for this album.

The brilliant young pianist Angelina Gadeliya – herself a product of Georgian, Ukrainian, Soviet
and American heritage – is perfectly positioned to explore the music of Schnittke and its
rich, complicated but compelling ancestry. She met Schnittke’s wife, Irina, and his biographer
Alexander Ivashkin at the Festival of Post-Soviet Music in Boulder, Colorado, in 1999 and became
a passionate advocate of Schnittke’s work after that encounter, considering him to be “one of
the greatest musical prophets of the 20th century”. From that point, she was able to go back and
trace Schnittke’s musical ancestry through the Viennese classical and modern schools, as well
as the influence of the Russian masters.
Gadeliya’s program includes two piano works of Schnittke – his Variations on a Chord from 1965
(one of the first Russian works to show the influence of 12-tone music) and the Piano Sonata
No. 2 from 1990, a work that is both neo-classic and modern in tone. In between, we hear the
Variations of Webern (the most extreme of the original Viennese 12-tone school), a Mozart
Adagio written after the death of the composer’s father, some of Shostakovich’s Variations
on an operatic theme by the classic Russian composer Mikhail Glinka and the ecstatic Sonata
No. 4 of Scriabin, a composer-mystic who described the main theme of this sonata as “the
striving upward toward ideal creative power”, a description that could fit most of the music
on this unique album.

HIGHLIGHTS
1.Music by Alfred Schnittke, the noted ‘underground’ or maverick composer
of the Soviet and post-Soviet era in Russia.
2.Major works by the Russian and Viennese composers, Mozart, Webern,
Shostakovich and Scriabin, Schnittke’s “ever-present ghosts”.
3.Superb performances by the outstanding young Georgian / Ukrainian / American
pianist Angelina Gadeliya who has specialized in the music of Schnittke and his influences.